The Dragonstone Alchemy allows you to reinforce your characters in a special way.

Cor Draconis (Rough). You can get these from Metins on the Lv. 90 Maps or higher and from various bosses. 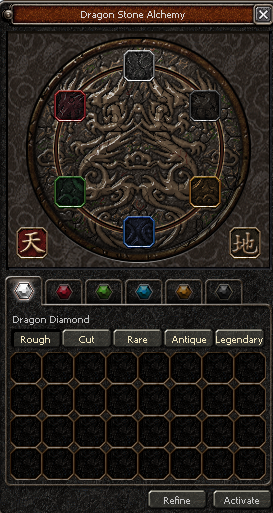 There are six different types (colors) of dragonstones, which all have a different power.

In addition there are different levels of improvement of the Dragonstones. Dragonstones can be refined on three different levels: Class, Purity and Level. As the level of the class increases, so does the number of bonuses a Dragonstone can have. There are the classes Rough, Cut, Rare, Antique and Legendary. With the degree of purity the effect of the Dragonstone increases. This means that the bonuses become stronger/higher. With the level of the dragon stone you can also increase the impact.

The following is a list of all Dragonstones and their bonuses:

To increase the level of a Dragonstone, you need Dragon Beans. In total there are 3 different Dragon Beans, which only vary in the chance of success.
The following is a list of the Dragon Beans: